Coffeeville is a small town in north-west Clarke County, with a population of approximately 360 residents. It was originally known as Murrell’s Landing in 1808, after an early settler William Murrell. It was later renamed Coffeeville in honor of General John Coffee, a hero of the Creek and Indian War. The town has a medical clinic, a bank, First United Security, a volunteer fire department, a police department, and a utilities department which provides water to over 1,000 customers. Coffeeville Utilities is also installing a new sewer system that will service residents inside the city limits. Clarke-Washington Electric Membership Cooperation provides electricity and natural gas is provided to most residents by Clarke Mobile Gas. Telephone service is through Century Link. The town has various retail shops and businesses. Coffeeville is known for its excellent hunting and fishing. Coffeeville Lake is the third largest lake in the Black Warrior and Tombigbee system with a surface area of 8,800 acres. The U.S. Army Corp of Engineers operates and maintains a modern campground located just two miles west of town. Approxmimately 25,000 campers, from all over the United States, visit the Service Park each year. Coffeeville is also home to the Coffeeville Lock & Dam. The Lock & Dam locks hundreds of commercial vessels each year, seeing all types of products such as coal, wood, steel, gas, oil, chemicals and many more. The lock also sees hundreds of recreational vessels each year. There are several boat ramps close by for fishermen and water enthusiast to utilize. Coffeeville is on the state birding trail. The cypress swamps along the river near Coffeeville may reward birders with an active heronry during the spring and summer. Waders can be seen throughout the year. Among other species found at various times include Northern bobwhite, the Mississippi kite and osprey. Elected officials include a mayor and five council members, and utilities board that is made up of seven members. 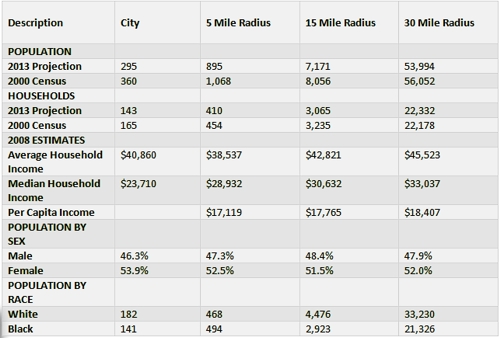