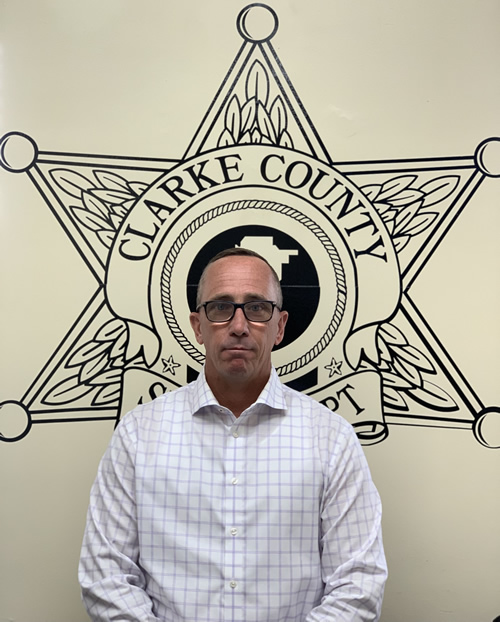 Sheriff Ray Norris graduated from one of the first classes of the Jefferson County Reserve Deputy Sheriff’s Academy. After graduating, he became a full time law enforcement officer. He worked for several municipal police departments and other law enforcement agencies throughout the years.  Sheriff Norris was hired by former Sheriff Jack Day and became a full-time deputy for the Clarke County Sheriff’s Department.  In 2010, Norris ran for the office of sheriff and won.  He was also re-elected in 2014.

Sheriff Norris is focused on serving the citizens of Clarke County.   He strives every day to meet the citizen’s needs, while also cracking down on the growing drug problem in the county. The Clarke County Sheriff’s Department works closely with the citizens along with local, state, and federal agencies to make our community a safe place to live, work and enjoy life.  The department employs 10 sworn deputies, 23 jail personnel, and 8 support personnel.

Clarke County is the third largest land-based county in the state with more than 700 miles of rural dirt roads to patrol. It borders the Alabama River to the east and the Tombigbee River to the west.  After taking office in 2011, Sheriff Norris immediately began transitioning from patrol cars to four wheel drive pickup trucks. Sheriff Norris has also established the county’s first water patrol.  He has obtained two boats, one through a grant and the other through discretionary funds.  Both patrol boats have sonar to help in search and recovery efforts.  Sheriff Norris has also taken advantage of the 1033 Program to secure surplus military equipment and acquired 8 Humvees, stationing them throughout the county at local fire departments.

Sheriff Norris works hand in hand with Project Lifesaver International for his department to become a Project Lifesaver agency. The primary mission of this is to provide small personal transmitters that emit an individualized tracking signal to individuals enrolled in this program. These individuals are for adults who are known for wandering due to Alzheimer’s or other related conditions or disorders.

Sheriff Norris updated the Clarke County Drug Task Force with three deputies working full-time focusing only on Clarke County. The task force works closely with other municipalities in the county to bring drug awareness to their community and they also conduct drug awareness programs in schools throughout the county.

Sheriff DeWayne Smith was appointed to his current position by Governor Kay Ivey on 28 June 2021. Prior to this appointment, Sheriff Smith was a detective with the Jackson Police Department. He has over 29 years of Law Enforcement leadership experience including Presidential Service, and has completed multiple senior Law Enforcement courses including the Police Executives Course and FBI National Academy. Sheriff Smith has taught leadership classes at multiple high schools, community colleges, and at the United States Marine Corps Staff Non-Commissioned Officer Academy.

Sheriff Smith has demonstrated leadership at the highest levels of the military, government, and Law Enforcement. He believes leaders must seek out and take responsibility while never delegating it. Whatever Sheriff Smith lacks in certifications, knowledge, or physical abilities, he promises to make up for in effort.

Sheriff Smith’s Personal Leadership Philosophy:  Influential leadership begins with a foundation based on leadership traits, the most important trait being “Integrity.” On that solid foundation is a framework of leadership principles, the most important principle being “Set the Example.” The final addition is electricity which is consistent and uninterrupted motivation. Motivation is contagious and he intends to contaminate everyone he comes in contact with.

1) Do the right thing! (Must be done even if no one is looking and/or if it is the hard thing to do.)

2) Treat everyone like you want to be treated! (Everyone is someone’s family member. Treat all like you would treat yours.)

3) Always do your best. (No one wants half effort. Give 100% or none at all. Anything less is disrespectful to yourself and others)

Sheriff Smith is family oriented. He takes pride in still being married since 1992. Sheriff Smith has three kids who are all college graduates. Any successes he credits to God.