Information on doing business in Jackson, including a market profile and a sketch of the proposed Tombigbee Marina, may be downloaded here in PDF format.

The city of Jackson is named for Andrew Jackson, a military hero of the Creek War and later President of the United States. He passed through the county with his troops in 1813. Jackson was incorporated just three years later, in 1816. It had originally been named Pine Level after the land company that laid out the new town.

Jackson City Hall with a population of approximately 5,300, Jackson is Clarke County’s largest city. It serves as a trade center for areas of north Washington County as well as portions of Choctaw County to the west.

An active volunteer fire department here sponsors an annual Fire Prevention Day parade that’s a hit with the youngsters, who are also taught fire safety. Both the fire and police departments are located at 118 College Avenue.

Pearce Memorial Park offers those who pay the annual membership fee an opportunity to cavort in a huge, spring-fed pool and enjoy all sorts of games and activities. There’s a nine-hole golf course and a community house that’s available for rent for private parties, receptions, and community events. In addition, the city has a public park with ball fields, playgrounds, and a walking track.

Electrical service is provided by both Alabama Power Company and Clarke Washington Electric Cooperative; both providers have an office in the city. Natural gas is available through Clarke-Mobile Gas Companies, and AT&T provides local phone service. Water and sewerage services is offered through the city, and Jackson contracts with Allied Waste for solid waste disposal.

For more information about living or visiting Jackson, contact the Jackson Area Chamber of Commerce at 500 Commerce Street, 251-246-3251; or e-mail jacksonchamber@earthlink.net. Or, you may contact Jackson City Hall at 251-246-3312. 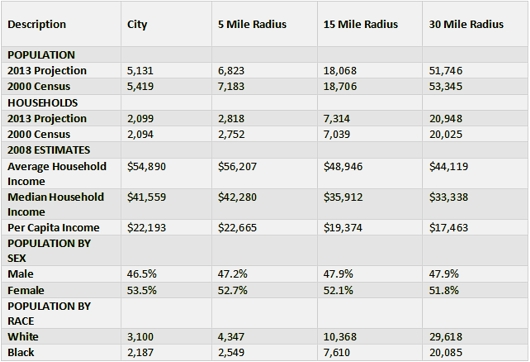