Founded in 1888, Thomasville had its beginnings in the nearby town of Choctaw. When the merchants there learned that a railroad line running from Mobile to Birmingham was coming through to the east, they realized the potential and quickly rebuilt their establishments in the new town. The first business district was destroyed by fire in 1899, but many of the stores were quickly rebuilt. Many of the existing buildings in the historic downtown business district were those erected after the fire.

Thomasville’s city government is composed of a full-time mayor and five elected Council members. City Hall is located at 559 West Front Street in a renovated wing of old Thomasville High School. The police department is also headquartered there. The Water Department and Chamber of Commerce are housed in the old City Hall, now known as the V.C. Wilkinson Building, which is located at 138 Wilson Avenue.

The City of Thomasville has seven parks. Gates Drive Park – named for the street it’s on, is adjacent to Thomasville High School. It is the city’s most complete recreation facility, with several baseball fields, three softball fields, bleachers, a pavilion, picnic areas, a concession stand, press box, walking track, water fountains, tennis courts, and playground equipment. McFadden Park, located behind the AL Martin building, has basketball courts, a baseball field, pavilions and picnic areas, restrooms, bleachers, playground equipment, and more. Strickland Field, located near City Hall, was named for a former mayor. The monument at Earl Tucker Field tells about the writer, speaker, and renowned columnist for whom the field was named. This ball park is located on Gates Drive across from Thomasville High School; it was built in Earl Tucker’s honor by the Lion’s Club. Thomasville also has a Recreation Center with indoor games and supervised activities as well as several play parks for children including the Thomasville Community Playground. This playground was built by a large group of community volunteers and is handicap accessible for all to enjoy. Another feature added to our community with the help of the Arts Council and Chamber of Commerce in 2015, is the Thomasville Community Garden. The garden is open for the entire community to enjoy and is cared for by the wonderful volunteers of Thomasville.

The City of Thomasville has recently opened the Thomasville Golf and Recreation Facility. This is an eighteen hole golf course with a remodeled club house available to rent for parties and meetings.

For more information about living in or visiting Thomasville, contact the Southwest Alabama Chamber of Commerce at 138 Wilson Avenue; 334-636-1542 or visit us on the web at www.thomasvillealchamber.com. 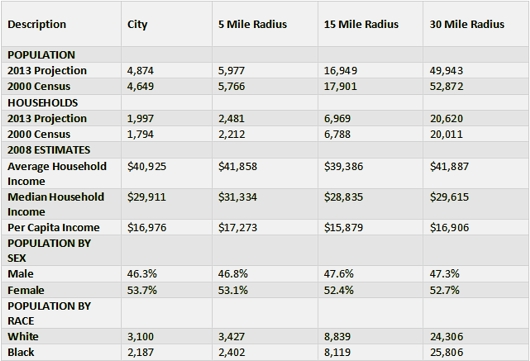